Hansard mix up on FOI Reform bills leads some (one?) of us astray 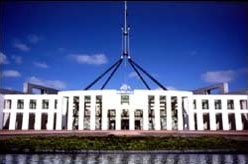 We all know you shouldn't believe everything you read, but news that a speech in Hansard-the record of parliamentary debate- was the wrong speech comes as a surprise. I had a phone call yesterday from the Department of Prime Minister and Cabinet that my posts ( here, here  and here) about what was "said" or "not said" in the Second Reading speeches on the Freedom of Information Amendment (Reform) bills in the Senate last week had sounded some alarm bells in Canberra (well, at least among those managing this legislative process.)

My points didn't gel with what the speeches were supposed to say. PM&C told me "Hansard had made an error by including in the first published version the wrong Second reading speeches"- those that had been made when the bills were introduced into the House of Representatives last November. The error had now been rectified and the record now is of what was tabled (or, my comment, intended to be tabled?) as the Second reading speeches.
Seeing as how the speeches were not read aloud but simply incorporated in the record, no one present in the Senate would have known anything had gone amiss (won't ask who was paying attention), but readers like your scribe had (understandably) gone off on the wrong track on the basis of what Hansard originally reported. ( How often does this happen, you have to wonder, and what gets missed in the wash?)
What was meant to be said by Senator Sherry on behalf of Minister Ludwig now appears as the Second Reading speeches on the bills in the Proof Senate Hansard for 13 May pages 17 -21. You wouldn't know of the error in reading this. Open Australia still has the original.

Where the correct version parts company with what I reported based on Hansard Version 1 includes these points:
Rather than not saying a word about capitulation by the Government on the onus in the AAT issue, the speech includes a defence of the Senate Committee recommendation, and the decision to backdown:

The Committee’s recommendation to amend the Freedom of Information Amendment (Reform) Bill to remove the concept of onus in both review proceedings by the Australian Information Commissioner and the Administrative Appeals Tribunal (AAT) is not supported by Coalition Senators, nor by some stakeholders who use the FOI Act. The Government does not accept that the Committee’s recommendation to remove the onus would have disadvantaged applicants. The removal of the onus was recommended to ensure that FOI applications were not treated as adversarial court processes. Notwithstanding this view, the Government has decided to retain the concept of onus in FOI proceedings, making it clear that the Bill is designed to make access to documents easier for applicants, with the agency or Minister under an obligation to justify why non-disclosure is necessary. Under an existing obligation in the AAT, an agency or Minister is required to use their best endeavours to assist the AAT to make a decision on an FOI review application. That obligation will also be applied to a review by the Australian Information Commissioner."

Rather than reiteration of the intention to provide a reference to the Australian Law Reform Commission concerning FOI for the private sector, as stated last November, the speech says nothing about this. I understand from PM&C that it remains on a list of possible references- sounds like a little backsliding to me.
Rather than indicating draft privacy legislation would be released early in 2010 the speech says release will be later in the year.
There is also this specific reference to attention to Senator Ludlam's concerns about blanket exclusion of intelligence agencies, obviously part of the deal to move the bills into the noncontroversial category:

To ensure the reform package delivers effective change, provision is made in the Bill for the Act to be reviewed two years after the commencement of the reforms. The review will be comprehensive, and will necessarily cover all aspects of FOI, including how well the two-tier review system is working, how the Office of the Australian Information Commissioner is operating, the exemptions in the Act, and agencies’ implementation of the new information publicationscheme. In order to address the concerns raised by the Australian Greens, the review will also need to include a consideration of whether the exclusion of agencies, including intelligence agencies, from the application of the Act is still appropriate and necessary. Naturally, such a consideration would require reference to international practice and consideration of what is in the Australian public’s interest. and that the review of exclusions from the act for intelligence agencies would be a matter to be examined in the comprehensive review of the act in two years time.

On this issue Andrew in a comment on this post says Senator Ludlam was incorrect in claiming the UK's MI5 and MI6 are covered by the FOI Act. I commented last year that the US CIA and New Zealand Intelligence Service are covered by relevant legislation in those countries.
Posted by Peter Timmins at 10:45 pm