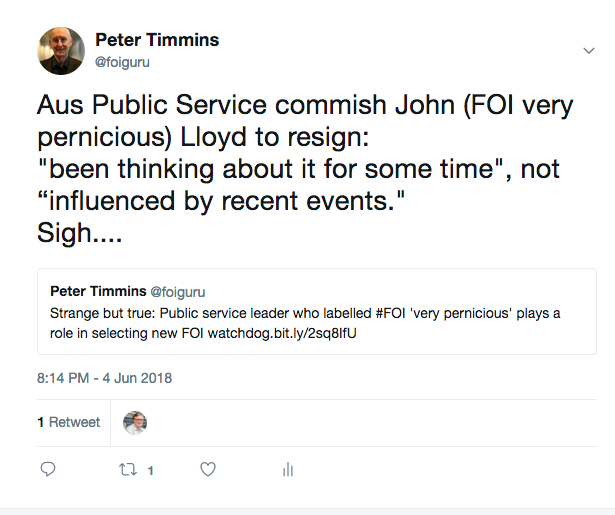 Posted by Peter Timmins at 1:30 pm No comments:

Australian Public Service Commissioner John Lloyd, who in 2015 labelled FOI 'very pernicious' and showed no appreciation of the role FOI plays in a democratic society, is on the selection advisory committee that will soon report to and recommend to the Attorney General a replacement Australian Information Commissioner.


Senate Estimates (pages 51-60) hearings last week on the Office of Australian Information Commissioner covered a lot of ground (more in another post) and revealed the process is in the final stages, interviews are complete and an announcement is expected before the end of the month. In addition to the commissioner, members of the committee are the Secretary of the Attorney General's Department (Chair), Secretary of the Department of Health, and the deputy CEO of the Digital Transformation Agency.

The APSC guidelines are that the APS Commissioner or his representative must be included in a selection committee for recruitment or appointment to a Senior Executive Service position. Usually the commissioner himself is involved for a band 3 position such as this.

It seems bizarre that Mr Lloyd would put himself forward for a role on this occasion.
Categorising FOI as pernicious-"extremely harmful, damaging, detrimental, deleterious" was bad enough from a leader of the public service.

A former attorney general said at the time Mr Lloyd "either has no understanding of the importance of FOI laws in a modern and transparent democracy or he is trying to undermine the legislation with his comments."

Mr Lloyd topped it off a few months later telling a Senate committee that FOI as originally conceived was intended ('particularly') to provide access to information about an individual's dealings with government, and that the law had expanded in the wrong direction since, completely missing the point that  the right to access government information enshrined in FOI law is about transparency and accountability and a cornerstone of democracy.

Mr Lloyd's views about the 'very pernicious' impact of FOI may have been reinforced in the last few weeks as he found himself in the hot seat in a seperate Senate estimates hearing arising from a decision by the Department of Prime Minister and Cabinet to refuse access to an FOI request arising from his correspondence with former colleagues at the Institute of Public Affairs. Mr Lloyd said he was not involved or consulted about the FOI. He confirmed after two days of questions in estimates that he is not under investigation, something alluded to in the PMC decision.

The OAIC and its important role in access to government information, privacy protection and information policy was under direct attack from 2014 to 2016 and has been underfunded since, operating with one commissioner instead of the three parliament legislated for. The government apparently has no intention of addressing that hole in the system-hardly in line with executive government responsibility to execute and maintain the laws of the Commonwealth.

Timothy Pigrim, now Angeline Falk and staff have soldiered on as OAIC responsibilities particularly in privacy protection have expanded, privacy issues have heated up and the office is to have a new role and some additional funding and resources for consumer data rights.

Information policy and FOI have been and remain the poor relations, the former disappearing in recent years and the latter marked for example by long delays in completing review applications, little public advocacy about the right to know, and two own motion investigations into what particular government agencies are up to in carrying out their FOI functions during the last six years or so, the most recent in 2014.

Living in hope, I'm sure others involved in the selection process particularly the Attorney General who has the last word, have a broad, deep understanding of the importance of FOI and the need for ongoing positive strong leadership in the long open government journey.

Posted by Peter Timmins at 5:35 pm No comments: