NSW pubs and police at one about secrecy 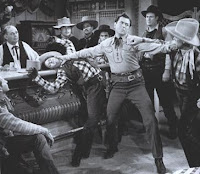 This editorial (second item "Mugging the public) in today's Sydney Morning Herald might be a bit tough in saying that the state government does not want you to know the restaurants where you might pick up a stomach bug - less than satisfactory legislation to require publication of serious breaches of standards has at last been introduced into Parliament. But it is right in pointing out what appears to be a happy coincidence of opinion that the Police and hotels think we shouldn't know which pubs have the most dangerous environments, and are fighting in the Administrative Decisions Tribunal to protect this information from disclosure under the Freedom of Information Act.

And what does it say about thinking in the Police Service about accountability, transparency and the potential perception of a conflict of interest, that the senior police officer scheduled to testify in the ADT proceedings about why disclosure shouldn't occur, has resigned from the service to take up this week the position of Director of Policing and Regulatory Relations with the Australian Hotels Association, apparently responsible for liaison between the hotel industry and the Police Service? Sheesh!

Email ThisBlogThis!Share to TwitterShare to FacebookShare to Pinterest
Labels: ADT, Freedom of Information