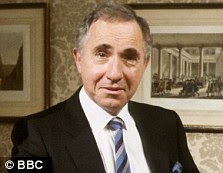 There are always lots of Yes Minister moments during Senate estimates hearings and they were there by the bucketload yesterday in Attorney General estimates.

This from the Yes Minister files:

Senator SINGH: I am interested in the OECD Convention on Combating Bribery of Foreign Public Officials in International Business Transactions. I understand that it released its latest assessment (on Australia) in October 2012, which included a working group on bribery, recommending a number of sufficient resources be given to prosecute foreign bribery cases, of which there were some 33 recommendations needing to be implemented. Has the government looked at the implementation of those recommendations and the issue of facilitation payments in relation to that convention?
Mr Wilkins : Yes.
Senator SINGH: Have we implemented those recommendations?
Mr Wilkins : It is under consideration. Are you talking about facilitation payments?
Senator SINGH: Yes.
Senator Brandis: That is under active consideration. It is something that I have discussed at some length with the department with a view to law reform.
Senator SINGH: And would that law reform look at introducing a ban, in line with the UK?
Senator Brandis: I think it is unwise to anticipate what the final shape of proposed law reform will be until the process of consideration within government has arrived at a final set of proposals. So, for that reason, I will not respond to your question.
Senator SINGH: But part of your consideration will include looking at the UK law?
Senator Brandis: Particularly in an area like this, which has important cross-jurisdictional dimensions, when the government or the department develop law reform proposals they would routinely look at the law of comparable jurisdictions, including the United Kingdom.
Senator SINGH: Do you have a time frame on that law reform proposal?
Senator Brandis: No.


These Q&Non-A sparked by The Greens Senator Ludlam ran a close second: