Federal parliament and an echo from the past on transparency 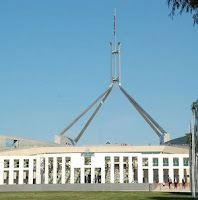 Department of Parliamentary Services secretary Alan Thompson sent staff a memo last week announcing his intention to retire with the expectation of finishing as agency head in early April. Mr Thompson said it had been ''an honour and a privilege'' to serve the Parliament over the past 3½ years. Mr Thompson's early departure comes as the Senate finance and public administration committee pursues a wide-ranging investigation into the performance of his agency, which employs 800 staff and spends $120 million a year providing services within Parliament House.

The parliamentary departments should be made subject to the FOI Act.

The response to this recommendation by the Howard, Rudd and Gillard governments, and every parliament since:

Posted by Peter Timmins at 4:30 pm

Email ThisBlogThis!Share to TwitterShare to FacebookShare to Pinterest
Labels: Freedom of Information, Parliament