Henry on Treasury and transparency 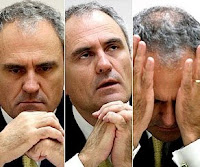 Canberra Times
The coincidence of timing that had Senate Estimates Committees spending hours last week going over the fine detail of the Government decisions of 12 October on deposit guarantees and the fiscal stimulus package, provided rare insights into what happens behind closed doors on major decisions that have to be taken promptly. As someone once said when comparing sausage making with policy development, not a pretty picture and you'd never eat a sausage again. Treasury Secretary Ken Henry's picture also tells a lot about what eight hours before a senate committee can do to you.

This was classic policy on the run (well Treasury had been thinking about the stimulus package since January or February)- great uncertainty, limited information, not much time.So it's not surprising that the process in hindsight looks, well, untidy- little consideration of options, risks, or unintended consequences; limited input from the Government's own experts such as the bank regulator;no modelling or cost-benefit analysis; some round-figures like $10.4 billion plucked out of the air.Nor is it surprising that things need to be refined as events moved forward.

There are plenty of opinions about the rights and wrongs of what was decided, but what does the exercise tell us about attitudes to transparency and accountability? One thing that emerged is that Henry thinks government decision making is best left to insiders and would be improved if pesky people didn't ask questions about it later.

Henry told the committee, “In my view, it would be better if we had not had any media reporting on this issue. [This would] allow the officials the opportunity to reflect soberly and deeply upon the implications of the various options ”

Here is some of the media commentary since.

An editorial in The Australian:

"Dr Henry's evident discomfort at media coverage at Tuesday's marathon Senate hearing is understandable, given the picture that has emerged of a flawed policy process. He is in many ways a fine public servant, but he clearly does not appreciate the importance of media scrutiny, continuous disclosure and accountability in a free and open democracy. It was, after all, his department that frustrated the release of Freedom of Information documents on the technical issue of bracket creep, a case The Australian took all the way to the High Court."

Brian Toohey in the Canberra Times :

"On the contrary, more public discussion may have lead to an outcome that caused less disruption in the financial markets than the subsequent freezing of mortgage funds and so on.

At least Henry did not go as far as the Australian Federal Police Commissioner, Mick Keelty, earlier this year called for a ban on defence lawyers and journalists criticising the role of police and intelligence agencies in a terrorism case “until the full gamut of the judicial process has been exhausted''

When the opposition leader, Malcolm Turnbull followed up The Australian’s report (about disagreement between Treasury and the Reseve Bank) in parliament, Rudd’s initial reaction was completely over the top. He even accused Turnbull of having being on the “strong red cordial”. In his appearance before the committee, Henry criticised Turnbull for earlier calling for guarantee limited to $100,000, saying it was “unhelpful” to canvas the issue publicly.

Turnbull refused to accept that either opposition politicians, or the media, should stay silent. He said, “We live in a democracy. With great respect to Dr Henry, while it might be desirable from his point of view if the civil servants of Australia could make all these decision out of the gaze of the public, and no doubt the politicians, that's not the type of society we live in”.

Turnbull was right on this. As Michelle Grattan in the SMH said

"By being overaggressive the Coalition senators failed to make the most of their hours of grilling Henry. On the other hand Henry left himself open to criticism by sounding as though these matters were secret business of the Government and the "Official Family" - the Treasury, Reserve Bank and other regulators."

Henry also made the following revealing comment about his view of the public interest in access to information about public service advice: it can be disclosed where this will correct some apparent misreporting in the media.

'Whilst I would not normally entertain questions such as this one, and in my 24 years of appearances before these committees never have, I think on this occasion there probably is a public interest in my confirming that in respect of the advice that was tendered to the Government, and that supported the decision that it took on Sunday the 12th of October, Mr Stevens and I were of one mind,'' he said.

Earlier, Dr Henry told the committee that suggestions Mr Stevens had opposed the bank deposit scheme prior to its announcement were "W-R-O-N-G”.“Were reservations expressed? No,” Dr Henry said.

“We noted there would be matters of detail to be sorted out in the implementation of the package, we did not express reservations.”

“I'm surprised that people would imagine that things could possibly be otherwise in announcing a package of this size that it could be implemented without matters of detail, having subsequent to the announcement, having to be sorted out.”

No-one seriously thinks that. If they do it's because government goes out of it's way to try to sound as if it has all encompassing solutions to black and white problems.Routine disclosure of what the government's experts think would also encourage informed debate and public understanding of the issues and options.

More not less transparency, and honest straight talk would be in all our interests.

Posted by Peter Timmins at 3:20 pm