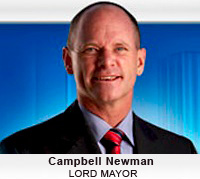 It was the ongoing prospect of unfair media coverage that Brisbane Lord Mayor Campbell Newman said justified a "cabinet exemption" under the Right to Information Act for some documents concerning the operation of Brisbane City Council contained in the City of Brisbane Bill that passed Queensland Parliament last week. So he wouldn't be surprised by  'Death of democracy at City Hall'  as the headline in the Brisbane Times the following day in its report on parliamentary debate on the bill. A step backwards for transparency, yes, and certainly not justified for the reason claimed by the Lord Mayor in the Brisbane Times. But the "death of democracy"  a quote from a Labor Councillor is over the top.It's not dead, just somewhat unnecessarily winged in the local government department.
Two local government exemptions were added to the RTI act through amendments contained in the City of Brisbane Bill 2010. They seem to me to be unnecessary (because sensitive information appears to be adequately protected by other RTI provisions) and unfortunate (because of the breadth of the wording, and the old give an inch some take a mile principle).  The reasons really amount to getting rid of a nuisance rather than protecting an essential public interest. The six independent members of parliament voted against - the other 78 from the major parties voted for.

The first change-not just relevant to Brisbane City Council- delivers to all local governments in Queensland an exemption for "information brought into existence in the course of a local government’s budgetary processes" for 10 years after that date . The exemption doesn't apply to information officially published by decision of the local government, but "in the course of budgetary processes" is a broad term, capable of wide interpretation in the right, or wrong hands. I can't recall a similar subject specific exemption of this kind elsewhere around the country. Minister for Local Government Boyle (debate on the bill 9 June starts at 1903) didn't elaborate on this occasion on the reasons for the change but reassured Parliament it "is an option for councils.. not a mandate. So it may be that those councils that wish to will still release their budgetary considerations and the papers associated with that when they announce their budgets." Hmm.. Queenslanders will see in due course.
The second change provides  an even broader exemption for documents concerning the Brisbane City Council's Establishment and Coordination Committee. As the Minister explained "the Establishment and Coordination Committee is, in effect, a mini cabinet. It is the committee that is chaired by the Lord Mayor and on which sits the chairs of all the standing committees of the council. It is our view, in supporting the request of the Lord Mayor, that their deliberations should be exempt in the same way as some papers are exempt for the state cabinet. The Premier, as the minister responsible for the right to information legislation, will set some guidelines, as have been set for state cabinet, about the release of decisions of the E&C and associated papers."

In support of the proposals the Miinister quoted the majority decision of the High Court in the Commonwealth v Northern Land Council in 1993, but you have to be persuaded that the Council Committee warrants the same degree of confidentiality as a cabinet before any of this supports the argument:

"But it has never been doubted that it is in the public interest that the deliberations of Cabinet should remain confidential in order that the members of Cabinet may exchange differing views and at the same time maintain the principle of collective responsibility for any decision which may be made."Further on in the decision the justices say "..the disclosure of the deliberations ... is liable to subject the members of that body to criticism of a premature, ill-informed or misdirected nature and to divert the process from its proper course. The mere threat of disclosure is likely to be sufficient to impede those deliberations by muting a free and vigorous exchange of views or by encouraging lengthy discourse engaged in with an eye to subsequent public scrutiny ... It is not so much a matter of encouraging candour or frankness as of ensuring that decision-making and policy development by Cabinet is uninhibited."

That is why we agreed with the Lord Mayor and have applied a similar provision as applies to our state cabinet to the E&C of the Brisbane City Council."

With a bit more context-that the Council presides over a population as big as Tasmania, the ACT and Northern Territory combined, and has a budget of more than $3 billion-that was about it.

The breadth of the exemptions and the reasons given certainly raise questions about all this. Not only those six independents in Parliament were unconvinced. A Brisbane Times poll (340 respondents) suggests public opinion is 90% against, even though the question, like the headline referred to above, was a little off the mark.