There are plenty of post mortems out there on the demise of the Rudd government, so I won't add much beyond these brief reminders of the big talk and slow and mostly modest delivery on openness and transparency over the last two and a half years. Getting Gov 2.0 to the stage of a warm endorsement and a touch beyond deserves a tick.
Days before the election in November 2007
Rudd tells the National Press Club the days of secrecy are over.
7.30 Report days after being elected
Prime Minister Rudd volunteers to Kerry O'Brien on the ABC 7.30 Report, that he plans to make a difference with Freedom of Information reform: "...I'm determined that we can actually do better with some decency in the standards of government. I also know, it's very easy to say those things before an election, then you become a government and you think well it's all a bit difficult now. But let me just give you one core example. I'm determined to do something about freedom of information. This is notoriously seen as something that executive governments don't like because it causes information to go out which might be embarrassing. I'd like to, by contrast, encourage a culture of disclosure within government departments."
April 2008-2020 Thinking Big
Governance gets a guernsey at the 2020 Summit, but interest in governing differently didn't last long."The response to the Governance chapter of the (2020 Summit) report includes a lot of the waffle Steketee refers to, not surprising, given the fact that much of the chapter lacked coherence, was repetitive, and included a lot of ideas that were trite and bordered on laughable as 2020 objectives."
November 2008
One year into government: "The Weekend Australian included a scorecard for many ministers ranging from 9/10 for Julia Gillard and Lindsay Tanner to 5/10 for Steve Conroy but didn't even bother to assess John Faulkner the minister responsible for integrity issues.We've said it before Faulkner has some runs on the board, but no there is no excuse for the pathetically slow pace of Freedom of Information reform which is still to get to first base. Even if we accept the proposed two stage reform process, just what is the hard part associated with abolishing conclusive certificates that means 12 months on, no legislation to achieve this has found its way into Parliament? As to the "changing the culture" intentions, don't start me....My assessment for Faulkner overall would be 7/10 but on the FOI front nothing to justify a pass and "needs to do much better."
A few weeks after that
"The Rudd Government has started to deliver on one element of its Freedom of Information reform commitments with the introduction into Parliament today of legislation to abolish entirely conclusive ministerial certificates.It's a welcome move, and goes further than recommended 13 years ago by the Australian Law Reform Commission, but took a year to eventuate and is nowhere near the top of most lists of urgently needed changes. On that front we are now told the Government "will release exposure draft legislation for public comment addressing broader reform measures aimed at promoting a pro-disclosure culture, as early as practicable in 2009."
November 2009
The Exposure Draft appeared in March 2009.On the last day of scheduled sittings for the year, the Government introduced FOI Reform legislation into Parliament where it was sent off to a Senate committee for report in March 2010. it was good and welcome but a long way short of comprehensive reform, with many missed opportunities to go for gold.
Mid 2010 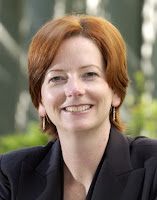 The Reform legislation passed and received assent in June 2010. Professor John McMillan had earlier been appointed Information Commissioner Designate. The legislation will  generally come into effect in November - three years after that Press Club speech - with new publication requirements to commence in May 2011. As to how a government obsessed with micro management of information flows addressed the challenge to "end secrecy" and "promote a pro-disclosure culture" Professor McMillan said a few weeks before Mr Rudd's departure "it is underway."

Prime Minister Gillard, fresh from the battle to force more transparency in the education system, needs to play a part to get this on track, through personal commitment backed up by example, as well as addressing her many other pressing priorities.
Posted by Peter Timmins at 12:19 pm