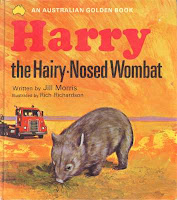 The Federal Treasury (make that all treasury departments) has a well-earned reputation for secrecy in many aspects of its work. We commented recently that Treasury would seem to prefer that major policy issues are sorted behind closed doors, that what goes on there remains confidential, and suggests subsequent questioning of that wisdom may have grave repercussions.Treasury Secretary Ken Henry had previously commented about why important elements of the policy development process won't be committed to paper if Freedom of Information applicants succeed in seeing what went on in the making of important decisions.

Perhaps Dr Henry's couple of weeks helping hairy-nosed wombats while on leave, and his work this year on the reform of our tax laws have opened new horizons regarding the importance of public debate and engaging with the citizenry in policy development. This (with emphasis added) from his address yesterday to the National Press Club ( Jim and hairy-nosed wombats feature prominently):

"Progressing tax system design isn't easy. But I'm optimistic. Certainly, it will be more feasible if we have a sensible discourse. Recognising that, the Review Panel has committed to a few ground rules: first, we must remain open to new ideas; second, the review is both too complex and too important to rush; and third, we cannot make good progress without engaging the community.

The steps in the review process are these. In August, as I have noted, the Treasury released its architecture paper, to seed debate. Next month, the Review Panel will release a consultation paper. That paper will summarise what we've heard so far from the community, identify some key issues, draw out the choices that emerge from our analysis of the issues, and seek views on a range of more specific questions. Following the release of the consultation paper there will be a second, longer consultation period of perhaps six months. During that time, there will be many opportunities for engagement – public meetings, round table discussions, and a tax policy conference in June.

We're going to see a first in Australia: ordinary Australians like Jim will be given the opportunity to put their commonsense view directly to people like me – and not just at the pub. The tax system is for the benefit of every Australian and it follows that every Australian should be able to debate its design.

In the second half of next year we will be writing up our report, due to the Government by December 2009."

Ordinary citizens like Jim will be better able to put views regularly on a range of matters if agencies like Treasury commit to greater transparency in the conduct of government business that affects us all.