Your Right to Know resumes after a spell 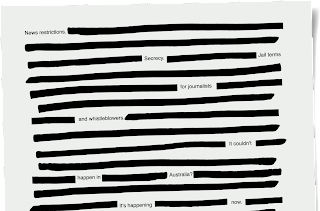 together with articles and editorials that explain (or attempt to) why excessive secrecy is everybody's business.

'Mad as hell...' has been the theme for four months following police raids on the ABC and the home of journalist Annika Smethurst. A tepid response from the government has prompted action to roll out their biggest gun-front page news with a website and strong social media presence.


The six point agenda for reform has undergone slight changes since rolled out but amounts to:

The 'this is everybody's business' line is welcome but slow in coming.

Many organisations and individuals have been slogging away on advocacy on these issues consistently for years.While journalists have had plenty to write about, media moguls put little shoulder to the wheel.

Twelve years ago media organisations were prompted by developments to shout from the rooftops they were not going to take infringements on the public's right to know silently anymore.


News Limited chairman and chief executive John Hartigan said Australia had become a "lightweight democracy" with a tangle of clumsy laws impinging on the public's right to know..... Mr Hartigan said it was time for the media to strike back."It's a matter of drawing a line in the sand and saying 'this is enough'," he said.


The coalition commissioned the Independent Audit into the State of Free Speech in Australia which delivered a 316 page report in October that year- I was the Deputy Chair.

The coalition made some headway on a couple of the issues raised in the report during the Rudd/Gillard years, and stuck around for a year or so.

Then disappeared as David Salter and Richard Ackland both commented in 2010, Ackland as follows:

I wondered why Australia's Right to Know Campaign had gone a bit quiet. This is the outfit driven by the main newspaper groups (including Fairfax) and broadcasters to lobby for fewer legal impediments that get in the way of reporters' access to information. A quick check of the Right to Know's website shows the last big thing to happen was a big free speech jamboree in Sydney a year ago. There have been no papers, reports or analysis since 2008. Maybe it's because The Australian newspaper has decided to change sides and go into the suppression business.

I wrote this at the time:

In early 2008 months after my involvement with ARTK as Deputy Chair of the Independent Audit of Free Speech finished I went to see John Hartigan, then head of News Ltd and ARTK, to make a pitch for the establishment of a permanent, professional and appropriately funded body to research, advocate, educate and lobby on freedom of speech, and the public’s right to be informed. I suggested that the media needed to seek out others who shared these interests, and that it cede some power to them so that the coalition could seek to deliver what its name conveyed-Australia's Right to Know. Voices on these issues were weak, sporadic, divided and underfunded and the coalition was well placed to change this. Hartigan listened politely, nodded at the appropriate time but that was it-and my last contact with ARTK.
A vigorous campaign would have involved enlisting allies to the cause, seeking to better inform the public about the importance of this issue, and  mounting a collective professional effort to go for gold on the reform front. The few voices that spoke up were all over the place, leading the Senate Committee to observe recently that there were many suggestions for changes to the reform bills, but no agreement on what should be changed, therefore there was no point in or time to consider them seriously, including most of those put forward by ARTK.  And of course many didn't speak up at all. ARTK three years after it formed has no web presence, no publicly available collection of submissions, no scorecard of performance, no coalition partners.

ARTK seemed to never hear about the government initiative in joining the Open Government Partnership let alone hop in to support the reform agenda that the likes of Transparency International Australia, Accountability Roundtable and others have pushed since 2013.

The case for that vigorous ongoing campaign and a collective professional effort is more important than ever.